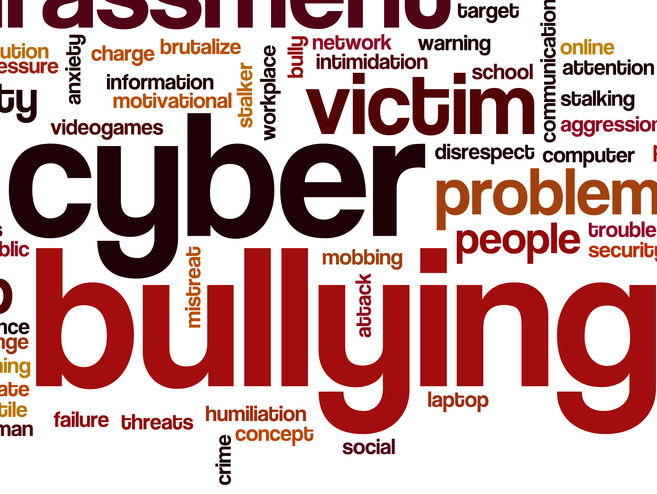 Cyberbullying or Cyber harassment is a form of bullying or harassment using electronic means. It has become increasingly common, especially among teenagers. Harmful bullying behavior can include posting rumors, threats, sexual remarks, a victims’ personal information, or pejorative labels (i.e., hate speech). Bullying or harassment can be identified by repeated behavior and an intent to harm. Victims may have lower self-esteem, increased suicidal ideation, and a variety of emotional responses, including being scared, frustrated, angry, and depressed. Cyberbullying may be more harmful than traditional bullying.

Internet trolling is a common form of bullying over the Internet in an online community (such as in online gaming or social media) in order to elicit a reaction, disruption, or for someone’s own personal amusement. Cyberstalking is another form of bullying or harassment that uses electronic communications to stalk a victim; this may pose a credible threat to the victim.

Not all negative interaction online or on social media can be attributed to cyberbullying. Research suggests that there are also interactions online that result in pressure, which can have a negative, positive, or neutral impact on those involved.

Cyberbullying is often similar to traditional bullying, with some notable distinctions. Victims of cyberbullying may not know the identity of their bully, or why the bully is targeting them. The harassment can have wide-reaching effects on the victim, as the content used to harass the victim can be spread and shared easily among many people and often remains accessible long after the initial incident.

Internet trolls intentionally try to provoke or offend others in order to elicit a reaction. Trolls and cyberbullies do not always have the same goals: while some trolls engage in cyberbullying, others may be engaged in comparatively harmless mischief. A troll may be disrupted either for their own amusement or because they are genuinely a combative person.

There are two kinds of Cyber Bullying:

2. Proxy: Using someone else to cyber bully a victim, this proxy may know they are cyberbullying and they may not.

Why anyone does children Cyber Bullying?

The research we had collected had made us think about what we can do to stop bullying in schools and in the areas. People, mainly teenagers, have trouble with cyber-bullying and find it hard to communicate with others about the problem they are facing. We decided that this needed to be stopped. People are getting hurt and lives are being lost, they are also suffering long-term effects such as depression and anxiety. It is more common for girls to be cyber-bullied then it is in guys and it is more common that girls cyber-bully more than boys.

To help this problem we have decided to either make the bullies informed about what they are doing by setting up a website that people can upload their screenshots of a cyber-bully so we can trace the culprit and make that person stop, the downside is that people can get more hate by this.

Create a website that famous people for being supportive to one another and for bullies themselves to read and get the idea that it makes peoples lives better. Same steps as the Informing bullies but the only screenshot those who are supporting others, whether in a game or on social networking.