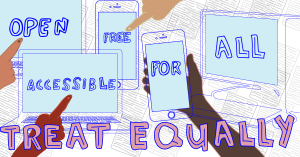 Net Neutrality-
It is the principle that Internet Service Provider must treat all data on the Internet the same, and not discriminate or charge differently by user, content, website, platform, application, type of attached equipment, or method of communication. For instance, under these principles, internet service providers are unable to intentionally block, slow down or charge money for specific websites and online content.

History-
The term was coined by professor Tim Wu in 2003, which was used to describe the role of telephone systems.
An example of a violation of net neutrality principles was the Internet service provider Comcast’s secret slowing (“throttling”) of uploads from peer-to-peer file sharing (P2P) applications by using forged packets. Comcast did not stop blocking these protocols, like BitTorrent, until the Federal Communications Commission ordered them to stop. In another minor example, The Madison River Communications company was fined US$15,000 by the FCC, in 2004, for restricting their customers’ access to Vonage, which was rivaling their own services. AT&T was also caught limiting access to FaceTime, so only those users who paid for AT&T’s new shared data plans could access the application. In July 2017, Verizon Wireless was accused of throttling after users noticed that videos played on Netflix and YouTube were slower than usual, though Verizon commented that it was conducting “network testing” and that net neutrality rules permit “reasonable network management practices”.

Under an “open Internet” schema, the full resources of the Internet and means to operate on it should be easily accessible to all individuals, companies, and organizations.
Applicable concepts include: net neutrality, open standards, transparency, lack of Internet Censorship, and low barriers of entry. The concept of the open Internet is sometimes expressed as an expectation of decentralized technological power, and is seen by some observers as closely related to open-source software, a type of software program whose maker allows users access to the code that runs the program, so that users can improve the software or fix bugs.
Proponents of net neutrality see this as an important component of an “open Internet”, wherein policies such as equal treatment of data and open web standards allow those using the Internet to easily communicate, and conduct business and activities without interference from a third party.
In contrast, a “closed Internet” refers to the opposite situation, wherein established persons, corporations, or governments favor certain uses, restrict access to necessary web standards artificially degrade some services, or explicitly filter out content. Some countries block certain websites or types of sites, and monitor and/or censor Internet use using Internet Speed, a specialized type of law enforcement, or secret police.

Traffic shaping is the control of computer network traffic to optimize or guarantee performance, improve latency (i.e., decrease Internet response times), and/or increase usable bandwidth by delaying packet that meet certain criteria. In practice, traffic shaping is often accomplished by “throtting” certain types of data, such as streaming video or P2P file sharing. More specifically, traffic shaping is any action on a set of packets (often called a stream or a flow) which imposes additional delay on those packets such that they conform to some predetermined constraint (a contract or traffic profile). Traffic shaping provides a means to control the volume of traffic being sent into a network in a specified period (bandwidth throttling), or the maximum rate at which the traffic is sent (rate), or more complex criteria such as generic cell rate algorithm

Legal enforcement of net neutrality principles takes a variety of forms, from provisions that outlaw anti-competitive blocking and “throttling” of Internet services, all the way to legal enforcement that prevents companies from subsidizing Internet use on particular sites. Contrary to popular rhetoric and statements by various individuals involved in the ongoing academic debate, research suggests that a single policy instrument (such as a no-blocking policy or a quality of service ?policy) cannot achieve the range of valued political and economic objectives central to the debate. As Bauer and Obar suggest, “safeguarding multiple goals requires a combination of instruments that will likely involve government and non-government measures. Furthermore, promoting goals such as the freedom of speech, political participation, investment, and innovation calls for complementary policies.”.