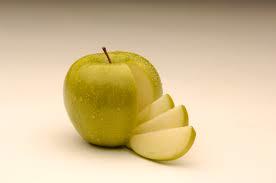 Now have a bite with more ease and says An apple a day keeps the doctor away.
Why did the apple float over the surface of the water? Did you know?
Apples have 25% of antioxidant i.e oxygen, when undergoes oxidation apples start getting brown which is called browning. But our biotech giants came up with the apples which are non-browning apples.
Arctic Apple is the first genetically engineered apple to be approved for commercial sale. These apples are a group of trademarked apples that contain a non-browning trait, when the apples are subjected to mechanical damage, such as slicing or bruising, the apple flesh remains as its original color. This is the creation possible by Biotechnology and genetic engineering.
They were developed through a process of genetic engineering by Okanagan Specialty Fruits. Specifically, gene silencing reduces the expression of polyphenol oxidase (PPO), thus preventing the fruit from browning.
Developing non-browning Arctic apples relies on a technique called RNA-interference (RNAi). This approach enables silencing of PPO expression to less than 10% of its normal expression but does not change other aspects of the apple. The RNAi process is accomplished through the use of a transgene that uses gene sequences that control PPO production. Promoter and terminator gene sequences are used to support the implementation of PPO suppression genes, as is a marker gene which produces a protein called NPTII that makes the plant tissue resistant to the antibiotic kanamycin, allowing transformed plants to metabolize neomycin and kanamycin antibiotics. This step is used to confirm that silencing PPO was successful.These non-browning apples are delicious, convenient and good for us. Discover apple varieties, uncover some of your favorite apple recipes, and learn more about the benefits of non-browning apples. Non-browning apples are more appealing and convenient, so more apples get eaten and fewer are wasted. Arctic apples are tasty, healthy grab and go snacks you’re sure to reach for, time and time again. Arctic apples arent slow browning. They aren’t low browning. They’re non-browning! By silencing the enzyme that causes apples to brown when bitten, sliced or bruised popular apple varieties like Golden Delicious and Granny Smith can be enhanced with the Arctic Advantage.
Okanagan Specialty Fruits, the grower-led team behind non-browning Arctic apples, was founded in 1996 by apple orchardist Neal Carter. Neal saw that apple consumption had been declining for decades while obesity rates skyrocketed, and he knew there must be a way to help get more people eating more apples.
There’s no question that consumers are demanding more convenience than ever, especially from our food. Whats the special about these apples? The browning of course! It may surprise you to learn that apples are among the most wasted foods on the planet around 40% of whats grown is thrown out. So many delicious apples get wasted only because of browning.
Non-browning apples don’t just reduce waste, they can also boost consumption. For instance, apple slices are a great grab-and-go snack, but they must either be eaten quickly or treated with something to slow their browning, which can add time, costs and an unpleasant off-taste. Snacking now makes up about 50% of eating occasions in the U.S., so making apples more convenient and snackable really is a no-brainer. With Arctic apples, you and your family can enjoy apples with convenience and taste to back up their good looks ? meaning healthy, delicious apple snacking is easier than ever.
Browning in apples is of two types? primary (or, enzymatic) browning and secondary browning. Secondary browning generally refers to the discoloration that occurs when an apple is beginning to decompose due to fungi and bacteria; in other words, when the fruit is rotting.
Primary browning in apples, on the other hand, takes place when the fruits phenolic compounds react with oxygen. This oxidation process is driven by an enzyme called polyphenol oxidase (PPO). When apple cells are ruptured ? for example, by bruising, biting or cutting, the browning reaction begins when PPO found in one part of the cell is able to react with phenolic compounds found elsewhere in the cell.Just as different plants have varying levels of PPO, there is a wide range of PPO levels among the 5,000+ apple varieties in existence. Some existing apple varieties turn brown more slowly than others, which can be due to a number of factors:
The various varieties of apples may have high levels of certain acids, such as malic and citric acids, which impedes the PPO/phenolic reaction. It may be low in the phenolic substrate so the reaction just doesn’t happen as intensively. It may have stronger cell walls, which reduces the mixing of PPO and phenolics. It may have naturally low levels of PPO. But, even slow or low browning apples do experience enzymatic browning; Arctic apples do not because there is insufficient enzyme to drive the oxidation reaction. The main motive is to provide the people with great ease to have an apple of their choice and can eat even if they’re busy because these apples are not going to brown that is called non-browning apples.