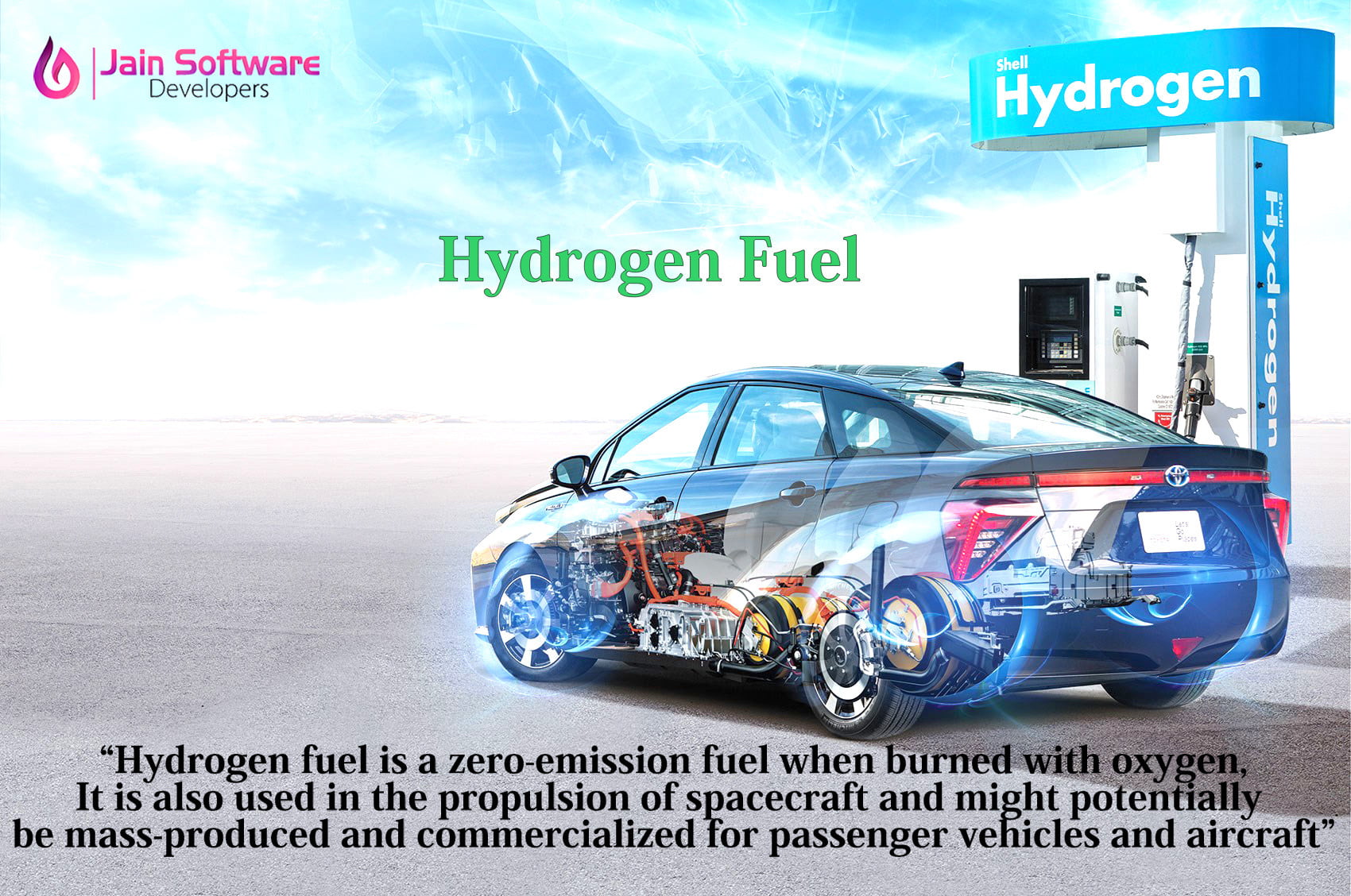 Hydrogen fuel is a zero-emission fuel when burned with oxygen. It uses electrochemical cells, or combustion in internal engines, to power vehicles and electric devices. It is also used in the propulsion of spacecraft and might potentially be mass-produced and commercialized for passenger vehicles and aircraft.
Hydrogen lies in the first group and first period in the periodic table, i.e. it is the first element on the periodic table, making it the lightest element. Since hydrogen gas is so light, it rises in the atmosphere and is therefore rarely found in its pure form, H2. In a flame of pure hydrogen gas, burning in air, the hydrogen (H2) reacts with oxygen (O2) to form water (H2O) and releases energy.
2H2(g) + O2(g) 2H2O(g) + energy
If carried out in the atmospheric air instead of pure oxygen, as is usually the case, hydrogen combustion may yield small amounts of nitrogen oxides, along with the water vapor.
The energy released enables hydrogen to act as a fuel. In an electrochemical cell, that energy can be used with relatively high efficiency. If it is simply used for heat, the usual thermodynamics limits the thermal efficiency.
Since there is very little free hydrogen gas, hydrogen is in practice only as an energy carrier, like electricity, not an energy resource. Hydrogen gas must be produced, and that production always requires more energy than can be retrieved from the gas as a fuel later on. This is a limitation of the physical law of the conservation of energy. Most hydrogen production induces environmental impacts.

Because pure hydrogen does not occur naturally on Earth in large quantities, it takes a substantial amount of energy in its industrial production. There are different ways to produce it, such as electrolysis and steam-methane reforming process.
Electrolysis and steam-methane reforming process ?
In electrolysis, electricity is run through water to separate the hydrogen and oxygen atoms. This method can use wind, solar, geothermal, hydro, fossil fuels, biomass, nuclear, and many other energy sources. Obtaining hydrogen from this process is being studied as a viable way to produce it domestically at a low cost. Steam-methane reforming, the current leading technology for producing hydrogen in large quantities, extracts the hydrogen from methane. However, this reaction causes a side production of carbon dioxide and carbon monoxide, which are greenhouse gases and contribute to global warming.

Hydrogen is locked up in enormous quantities in water, hydrocarbons, and other organic matter. One of the challenges of using hydrogen as a fuel comes from being able to efficiently extract hydrogen from these compounds. Currently, steam reforming, or combining high-temperature steam with natural gas, accounts for the majority of the hydrogen produced. Hydrogen can also be produced from water through electrolysis, but this method is much more energy demanding. Once extracted, hydrogen is an energy carrier (i.e. a store for energy first generated by other means). The energy can be delivered to fuel cells and generate electricity and heat or burned to run a combustion engine. In each case, hydrogen is combined with oxygen to form water. The heat in a hydrogen flame is a radiant emission from the newly formed water molecules. The water molecules are in an excited state on the initial formation and then transition to a ground state; the transition unleashing thermal radiation. When burning in air, the temperature is roughly 2000 C. Historically, carbon has been the most practical carrier of energy, as more energy is packed in fossil fuels than pure liquid hydrogen of the same volume. The carbon atoms have classic storage capabilities and releases even more energy when burned with hydrogen. However, burning carbon-based fuel and releasing its exhaust contributes to global warming due to the greenhouse effect of carbon gases. Pure hydrogen is the smallest element and some of it will inevitably escape from any known container or pipe in micro amounts, yet simple ventilation could prevent such leakage from ever reaching the volatile 4% hydrogen-air mixture. So long as the product is in a gaseous or liquid state, pipes are a classic and very efficient form of transportation. Pure hydrogen, though, causes the metal to become brittle, suggesting metal pipes may not be ideal for hydrogen transport.

Hydrogen fuel can provide motive power for liquid-propellant rockets, cars, boats and airplanes, portable fuel cell applications or stationary fuel cell applications, which can power an electric motor. The problems of using hydrogen fuel in cars arise from the fact that hydrogen is difficult to store in either a high-pressure tank or a cryogenic tank
An alternative fuel must be technically feasible, economically viable, easily convert to another energy form when combusted, be safe to use, and be potentially harmless to the environment. Hydrogen is the most abundant element on earth. Although hydrogen does not exist freely in nature, it can be produced from a variety of sources such as steam reformation of natural gas, gasification of coal, and electrolysis of water. Hydrogen gas can use in traditional gasoline-powered internal combustion engines (ICE) with minimal conversions. However, vehicles with polymer electrolyte membrane (PEM) fuel cells provide a greater efficiency. Hydrogen gas combusts with oxygen to produce water vapor. Even the production of hydrogen gas can be emissions-free with the use of renewable energy sources. The current price of hydrogen is about $4 per kg, which is about the equivalent of a gallon of gasoline.

However, in fuel cell vehicles, such as the 2009 Honda FCX Clarity, 1 kg provides about 68 miles of travel. Of course, the price range is currently very high. Ongoing research and implementation of a hydrogen economy are required to make this fuel economically feasible. The current focus is directed toward hydrogen is a clean alternative fuel that produces insignificant greenhouse gas emissions. If hydrogen is the next transportation fuel, the primary energy source used to produce the vast amounts of hydrogen will not necessarily be a renewable, clean source. Carbon sequestration is referenced frequently as a means to eliminate CO2 emissions from the burning of coal, where the gases are captured and sequestered in gas wells or depleted oil wells. However, the availability of these sites is not widespread and the presence of CO2 may acidify groundwater. Storage and transport is a major issue due to hydrogens low density.

Is the investment in new infrastructure too costly?

Can our old infrastructure currently used for natural gas transport be retrofitted for hydrogen?

The burning of coal and nuclear fission are the main energy sources that will be used to provide an abundant supply of hydrogen fuel.

How does this process help our current global warming predicament? The U.S. Department of Energy has recently funded a research project to produce hydrogen from coal at large-scale facilities, with carbon sequestration in mind.

Is this the wrong approach? Should there be more focus on other forms of energy that produce no greenhouse gas emissions? If the damage to the environment is interpreted as a monetary cost, the promotion of energy sources such as wind and solar may prove to be a more economical approach.

The possibility of a hydrogen economy that incorporates the use of hydrogen into every aspect of transportation requires much further research and development. The most economical and major source of hydrogen in the US is the steam reformation of natural gas, a nonrenewable resource and a producer of greenhouse gases. The electrolysis of water is a potentially sustainable method of producing hydrogen, but only if renewable energy sources are used for the electricity. Today, less than 5% of our electricity comes from renewable sources such as solar, wind, and hydro. Nuclear power may be considered as a renewable resource to some, but the waste generated by this energy source becomes a major problem. A rapid shift toward renewable energy sources is required before this proposed hydrogen economy can prove itself. Solar photovoltaic (PV) systems are the current focus of my research related to the energy source required for electrolysis of water. One project conducted at the GM Proving Ground in Milford, MI employed the use of 40 solar PV modules directly connected to an electrolyzer/storage/dispenser system. The result was an 8.5% efficiency in the production of hydrogen, with an average production of 0.5 kg of high-pressure hydrogen per day. Research similar to this may result in the optimization of the solar hydrogen energy system. Furthermore, the infrastructure for a hydrogen economy will come with high capital costs. The transport of hydrogen through underground pipes seems to be the most economical when demand grows enough to require a large centralized facility. However, in places of low population density, this method may not be economically feasible. The project mentioned earlier may become an option for individuals to produce their own hydrogen gas at home, with solar panels lining their roof. A drastic change is needed to slow down the effects of our fossil fuel dependent society. Conservation can indeed help, but the lifestyles we are accustomed to requiring certain energy demands.