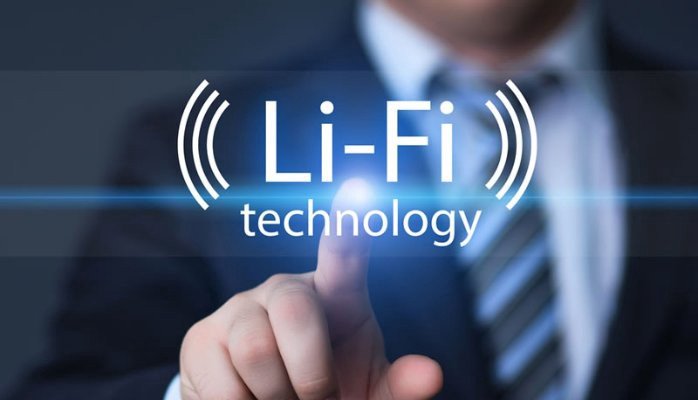 Li-Fi is a technology for wireless communication between devices using light to transmit data. In its present state only LED lamps can be used for the transmission of visible light. LiFi is designed to use LED light bulbs similar to those currently in use in many energy-conscious homes and offices. However, LiFi bulbs are outfitted with a chip that modulates the light imperceptibly for optical data transmission. LiFi data is transmitted by the LED bulbs and received by photoreceptors. Li-Fi’s early developmental models were capable of 150 megabits-per-second (Mbps). Some commercial kits enabling that speed have been released. In the lab, with stronger LEDs and different technology, researchers have enabled 10 gigabits-per-second (Gbps), which is faster than 802.11ad. The term was first introduced by Harald Haas during a 2011 TED Global talk in Edinburgh. In technical terms, Li-Fi is a visible light communications system that is capable of transmitting data at high speeds over the visible light spectrum, ultraviolet, and infrared radiation. In terms of its end use the technology is similar to Wi-Fi. The key technical difference is that Wi-Fi uses radio frequency to transmit data. Using light to transmit data allows Li-Fi to offer several advantages like working across higher bandwidth, working in areas susceptible to electromagnetic interference (e.g. aircraft cabins, hospitals) and offering higher transmission speeds. The technology is actively being developed by several organizations across the globe.

By using LiFi in all the lights in and around a building, the technology could enable greater area of coverage than a single WiFi router. Drawbacks to the technology include the need for a clear line of sight, difficulties with mobility and the requirement that lights stay on for operation.

All the existing wireless technologies utilize different frequencies on the electromagnetic spectrum. While Wi-Fi uses radio waves, Li-Fi hitches information through visible light communication. Given this, the latter requires a photo-detector to receive light signals and a processor to convert the data into streamable content. As a result, the semiconductor nature of LED light bulbs makes them a feasible source of high-speed wireless communication.

So, how does it work? Lets look at the working of Li-Fi:-

When a constant current source is applied to an LED bulb, it emits a constant stream of photons observed as visible light. When this current is varied slowly, the bulb dims up and down. As these LED bulbs are the semiconductor, the current and optical output can be modulated at extremely high speeds that can be detected by a photo-detector device and converted back to electrical current.

The intensity modulation is too quick to be perceived with the human eye and hence the communication seems to be seamless just like RF. So, the technique can help in transmitting high-speed information from an LED light bulb. However, its much simpler, unlike RF communication which requires radio circuits, antennas, and complex receivers.

Now that we know what Li-Fi is and how it works, the question is where it stands when compared to Wi-Fi. In order to get an understanding as to which one is superior, lets take a look at certain aspects of both the technologies:-

Li-Fi provides a great platform to explore the grounds of transmission of wireless data at high rates. If this technology is put into practical use, each light bulb installed is potential and can be used as a Wi-Fi hotspot to transmit data in a cleaner, greener and safer manner. The applications of Li-Fi are beyond imagination at the moment. With this enhanced technology, people can access wireless data with the LEDs installed on the go at very high rates. It resolves the problem of shortage of radio frequency bandwidth. In various military applications, where RF-based communications are not allowed, Li-Fi could be a viable alternative to securely pass data at high rates to other military vehicles. Also, LEDs can be used effectively to carry out VLC in many hospital applications where RF-based communications could be potentially dangerous. Since light cannot penetrate through walls, it could be a limitation to this technology. Nevertheless, given its high rates of data transmission and applications in multiple fields, Li-Fi is definitely the future of wireless communication.