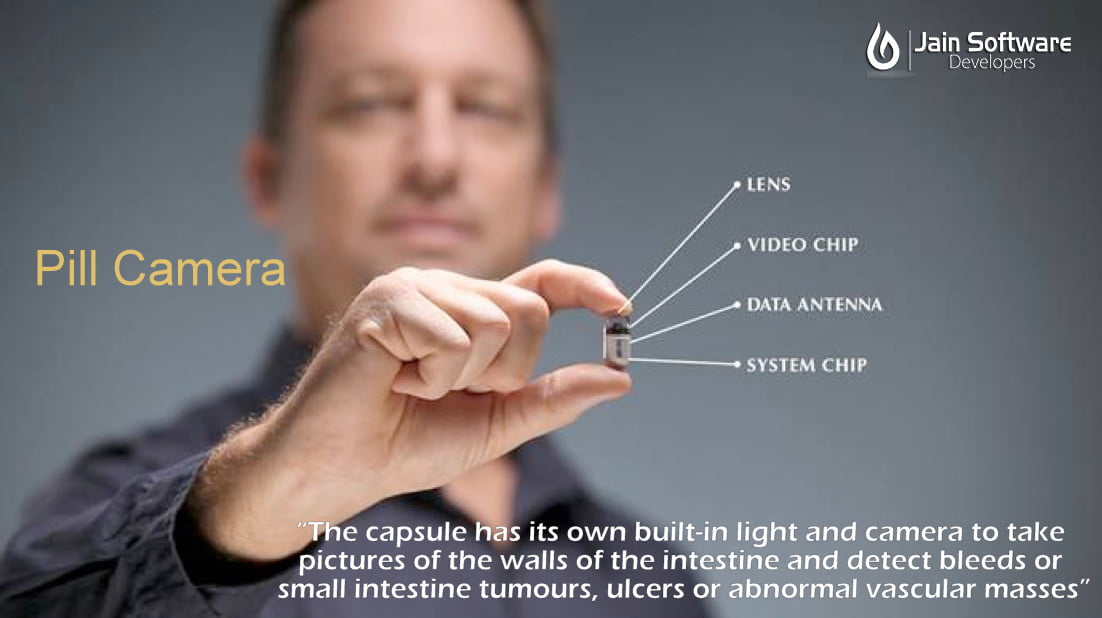 For detecting diagnosis a pill-sized video capsule is swallowed, which slowly travels through your intestine before being naturally excreted. The capsule has its own built-in light and camera to take pictures of the walls of the intestine and detect bleeds or small intestine tumors, ulcers or abnormal vascular masses. 2-4 images are taken per second for up to 8 hours. The images are transmitted to a recorder that is worn around the waist.

You may require this investigation if you have abnormal bleeding or are suspected to have Crohn’s disease. This investigation is non-invasive and allows doctors to examine all three portions of the small intestine

which often cannot be reached by other imaging methods.
What is Capsule Endoscopy used for?

Capsule enteroscopy allows your doctor to visualize the small intestine which is often missed by conventional imaging methods such as upper gastrointestinal endoscopy or colonoscopy. The most common reason for ordering this investigation is to look for sources of bleeding. You may have noticed blood in yo ur vomit or faeces, or have unnoticed blood loss that can cause iron deficiency anaemia. This investigation can identify polyps, inflammatory intestine disease (Crohn’s disease or?ulcerative colitis), ulcers and tumors that may be the source of the bleeding. Such lesions may not have been found by previous investigations but once identified; your doctor can decide an appropriate course of management.

The other main use is for evaluating the extent of Crohn’s disease, which commonly affects the small intestine. This investigation is particularly useful for detecting early disease which may be missed by barium examination and CT. Also, it can be useful in patients who have symptoms which do not match the extent of disease (if any) seen by conventional imaging techniques.

Wireless capsule enteroscopy may have further indications in the future as it is safe, easy to perform, non-invasive and doesn’t require sedation. In particular, if techniques are invented that allow treatments or biopsies (tissue sampling) to be performed at the time of the procedure, it will become a very useful procedure.

It should be noted that this investigation may not always be the best for you. The images taken by the camera are of poorer quality than those obtained by upper gastrointestinal endoscopy or colonoscopy. In addition, the camera may move too fast or slow to examine or the appropriate areas or be facing the wrong way and miss some lesions. Thus, it is only one possibility?of a series of investigations you may require in order for your doctor to make a correct diagnosis.
How do you prepare for the procedure?

Prior to the procedure, your doctor will explain what the procedure involves, risks, benefits and why it is indicated in your case. You will need to fast (don’t eat or drink) for around 10 hours before the investigation, as it is safest and produces the best results when the intestine is empty.

No fluid is taken for at least 2 hours and no food for a further 4 hours after swallowing the capsule. Oral medications can be taken after 2 hours if required.

If you are diabetic, the medication must be stopped during the fasting period and insulin use should be discussed with your doctor.

There is usually no need for intestine preparation, but strong colored tablets (e.g. iron tablets) should be avoided for about 24hrs before the procedure.
What does the procedure involve?

For the procedure, you will be required to swallow a 26x11mm endoscopy capsule equipped with a video camera, light source, radio transmitter, and batteries. The capsule is swallowed with a substance called simethicone, to prevent bubbles forming and interfering with the images.

The capsule passes naturally through your body via peristalsis (contraction and propelled by the muscular walls of the gastrointestinal tract) while it takes many images. The images are detected by a sensor device attached to your abdomen with 8 small aerials taped to the skin (similar to the electrodes used for an ECG). These are recorded and stored on the image recorder worn around your waist.

After approximately 8 hours you will be required to return to the medical center so the images can be downloaded and examined on a computer monitor by the physician. Around 50,000 images will be taken per investigation, so it can take a long time for these to be examined and processed. Your doctor will normally inform you of the results within a week.

You should pass the capsule naturally after 8-72 hours, but it can sometimes take up to two weeks. If you haven’t passed the capsule by this time, an X-ray may need to be performed to see if it is still present or obstructed. The capsule is discarded after it has been excreted.
What are the risks?

Capsule enteroscopy is a safe procedure and is well tolerated by most patients. Less than 1 in 10 people have difficulty swallowing the capsule, which has a gel coating to help you swallow it.

The main risk is retention of the capsule, which occurs in about 1 in a hundred people. The capsule becomes impeded by a stricture (narrowing) secondary to a tumor, inflammation or scarring from previous surgery. It is not dangerous in the short term, but you may require a surgical intervention to remove it. Obstruction may present as bloating, vomiting or pain. You should consult your doctor promptly if you experience these symptoms. In most cases, the capsule will pass naturally from the body without any problems.