A UAV is defined as a “powered, aerial vehicle that does not carry a human operator, uses aerodynamic forces to provide vehicle lift, can fly autonomously or be piloted remotely, can be expendable or recoverable, and can carry a lethal or nonlethal payload”. 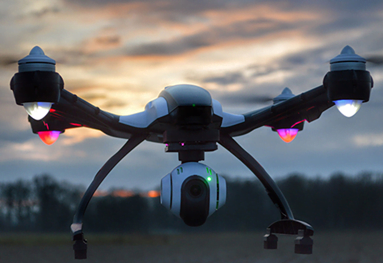 An unmanned aerial vehicle (UAV), commonly known as a drone, as an unmanned aircraft system (UAS), or by several other names, is an aircraft without a human pilot aboard. The flight of UAVs may operate with various degrees of autonomy: either under remote control by a human operator, or fully or intermittently autonomously, by onboard computers. Drones for sale are actually considered multirotors, but most people still call them drones because it’s easier to say. A quadcopter is another type of multirotor aircraft with four rotors.Drones can carry and deliver right from general goods to missiles. In fact many MNC’s have started their own drone delivery systems. Using the drone technology improve customer service, maintenance and even capture the news. There are issues concerning public privacy related to drones like battery life, weather, unreliable location data, aggressive birds and the risk of packages being intercepted by thieves or shot down have all been cited as hurdles to overcome. Realistically with rising rents and increasing complication of airspace regulation drones may become more trouble than they’re worth. Having drones fly over densely populated areas requires sophisticated technology to ensure the drone doesn’t fly into someone or something, has awareness of other aircrafts, is trackable by air traffic control, has failsafe mechanics, and that the legal and insurance environment allows pilotless machines in the airspace.But the benefits like decongesting road traffic and reducing pollution during festival times outweighs its negative impact.